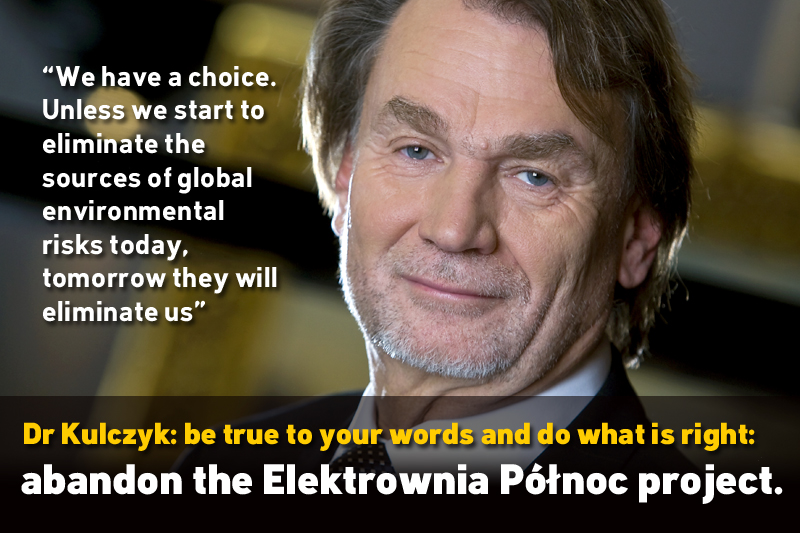 The main investor of Elektrownia Północ is Kulczyk Investments – a financial group which belongs to one of the richest families in Poland – the Kulczyks. The Kulczyks have built their financial empire investing in many sectors of economy, from real estates to building highways. Yet the empire’s heart is mining industry, including many projects which involve fossil fuels: oil, coal, natural and shale gas. The group is making profits from dirty energy all over the world, their controversial projects meeting with growing opposition of local communities. A stark example of such controversies is the case of shale gas extraction in Tunisia where another company owned by the Kulczyks – Serinus Energy – has been fiercely criticized by NGOs and local citizens who revealed that fracking would not only require the use of gigantic quantities of water, a resource already scarce in the area, but would also pollute it with dangerous chemicals and radioactive particles. The case is monitored by the Bankwatch Network whose experts already brought to light the fact that the investor’s claims that this project is harmless cannot be deemed truth. On the contrary, it would be catastrophic for the environment and the people whose voices against it had not been taken into consideration. The similarities between this case and the Północ Power Plant are striking.

The idea of building a power plant in Pomerania was a pet project of the late head of the Kulczyk empire – the richest Pole, Jan Kulczyk. In his long and successful career the millionaire went to great lengths to uphold his image of philanthropist and environment protector. Kulczyk declared on many occasions his deep concerns with the state of the natural world. ‘We have a choice. If we do not eliminate sources of global environmental threats today, they will eliminate us tomorrow’ – he said. As hard to believe as it might be, the businessman investing in environmental destruction and fossil fuels was also the Chairman of the Green Cross International – a respectable organization working for ecological safety. Kulczyk praised Green Cross Int. for its ‘achievements and agreed policies, especially those concerning preservation of biological diversity, climate changes, changes to patterns of consumption and production, combating poverty and promoting social and economic development’ and made building upon them the organisation’s goals under his leadership. Ironically, he was also in the Climate Change Task Force – a working group of climate experts, world leaders, Nobel peace laureates, and shapers of opinion – helping create the political will to address climate change.

The public opinion did not fail to see that extractivism, especially investing in fossil fuels and building new coal power plant in Poland, clearly contradicted with both institutions’ missions and greatly undermined their credibility. In 2014 a petition to Jan Kulczyk signed by over 8000 people was handed over to the investor. The signatories asked Kulczyk to be true to his words and noble declarations: to abandon the Elektrownia Północ project and invest in clean, renewable energy instead. The petition was handed over by Pinocchio – a perfect symbol of the businessman’s double-dealing. There was no answer to that appeal till the investor’s death in 2015.

Will the heirs of the Kulczyk empire live up to the noble declarations, however unrealized, of Jan Kulczyk? Will they make them a reality by transforming Kulczyk Investemnts into a truly responsible company in terms of environmental protection? Many still have faith in the daughter of the late Jan Kulczyk – Dominika, who has recently become the Charwoman of the Kulczyk Investemnts Supervisory Board and has already established herself as a person sensitive to environmental destruction, violation of human rights and human tragedy. An experienced philanthropists herself, funder of her own charity foundation and chairwoman of Green Cross Poland, she has all the power and knowledge to support the protection of the planet and its inhabitants from dangers her father had diagnosed. We hope that closing the Północ Power Plant project will set out a new path for Kulczyk Investments as a business leader of clean, climate friendly, sustainable technologies. Such decision would become the greatest memorial for the late Jan Kulczyk.